As part of my pre-trip planning I had obtained the phone number of the Tourist shuttle bus that runs out of Durness to Cape Wrath.  We had made reservations to ride the bus back to Durness from the Cape, departing at 1300 hours on Friday.  Since it was 6 or 7 very rough untracked miles from Sandwood Bay to the lighthouse, we started our day about 0600.  The walk is slow and fairly hilly with bogs and lochans to get around and through.  At two points there are large gullies around which you must walk quite far inland.  We wanted to walk as close to the ocean side cliff  as we could, but due to irregularities in the terrain we found ourselves weaving back and forth to get through.

Cape Wrath has quite a large Naval and Air bombardment range belonging to the MOD (Ministry of Defence).  During live firing exercises you cannot (legally or safely) hike from Sandwood to the Cape.   Up until the day we arrived at Cape Wrath they had been having NATO live fire exercises.  When we reached the big fence with the red flags and warning signs, we had a few misgivings about climbing over and entering the range but did so anyway.

The signs and flags were still up, but we assumed that since the exercises had just ended that they just hadn't gotten around to taking them down.  We hoped! 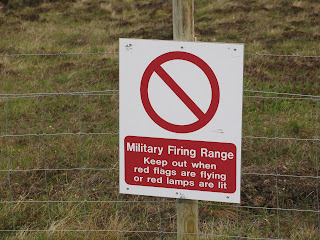 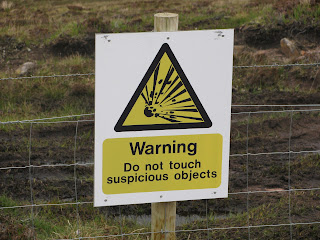 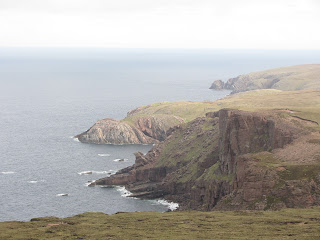 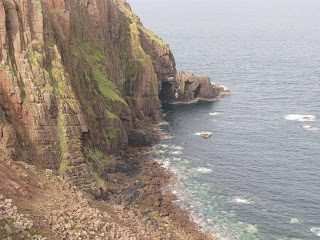 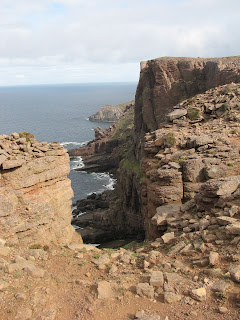 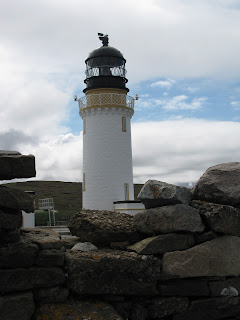 The history of Cape Wrath and its lighthouse is well described here:
http://www.durness.org/cape%20wrath.htm 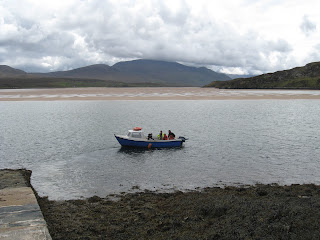 From Fort William, my hiking partner soon headed back to Massachusetts, and I headed south on the West Highland Way to add a little less than 100 more miles to my Scottish holiday.

The continuation of my month long holiday in Scotland, the West Highland Way, can be found at http://www.samohtwwhw.blogspot.com/
Posted by Unknown at 7:51 PM 1 comment:

This was the day I had been waiting for.  Walking to Sandwood......  I first saw pictures of Sandwood and Sandwood beach approximately ten years before.  I recall often daydreaming about camping at Sandwood someday.  Well, that day was here!  Maudlin as it sounds, I was hiking with my heart in my throat.

The walk this morning was effortless due to the marvelous weather again.  How lucky can we get.  The narrow single track road leading past the tiny villages of Oldshoremore, Oldshorebeg & Blairmore abounded with picturebook views of the ocean, tiny white cottages, green fields, and gold sand beaches.

How I would love to spend some years in one of these tiny cottages with the sea as my front yard and the seabirds as my music.  My childhood days living in a fishing village in coastal Maine somehow planted within me a yearning for that type of  "end of days". 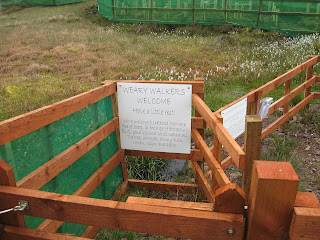 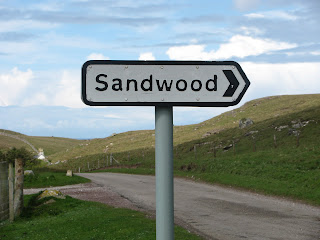 The track leading to Sandwood Bay ranged from a well maintained Landrover track, to an eroded, jumbled footpath.  However it was easy walking, with a destination long anticipated.  I was not disappointed.  It was a dream come true.  During our nearly full day, and the overnight camped there we encountered no more than five other people and one beautiful Alaskan Malemute Husky. 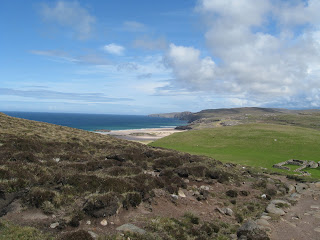 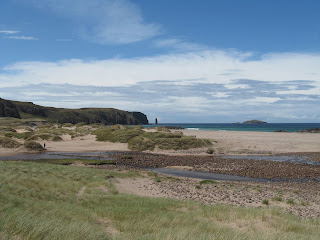 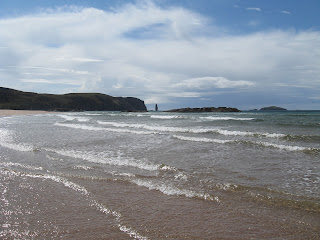 ﻿
﻿Cape Wrath, situated at the extreme northwest tip of Scotland is the location of the Cape Wrath Lighthouse, our final destination of this backpacking trip.  So far we are only seven miles from the end.  Sandwood and Sandwood Bay were named using a corruption of the "Norse" word(s) for "turning point".  The Viking Longships used the long easily seen beach of Sandwood as the point where they would turn south toward Ireland and there conduct their brutal raids. I also have read that "Wrath" was the Norse word for "turning point", but I suppose it's "no matter".

The area around Cape Wrath and Sandwood has long been the graveyard of sailing ships.  When we pitched our tents I used a huge metal object lying on the ground to tie off one of my tent corners.  I was fascinated by the object, and observed that it looked hand forged, and might be part of a shipwreck.  I took several pictures of the object and when I returned to New England I took the pictures to the Maine Maritime Museum.

Here is what I learned from one of the museum curators:  The device is indeed part of a very old sailing ship. Possibly dating back to the 1700s or earlier due to its style of manufacture.   The artifact is called a Pintle (number 2 on the diagram below). A part of the rudder for a wooden dailing ship likely wrecked on these shores.  The mounting holes had been hand driven and the hammer marks made during its forging were still in evidence.  Part of my university education involved using a small blacksmiths forge, anvil, hammers, and the making of small forgings.  Thus I  immediately felt a kinship with this object and did actually guess its identity correctly.  Of course being born and partly raised in a seafaring community on an island in the state of Maine helped too. 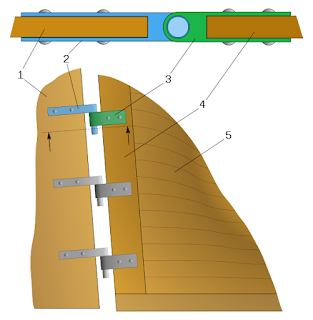 "English: Scheme of a pintle-and-gudgeon system of medieval and early modern ships with sternpost-mounted rudder. This system appeared first in northern Europe in the early 12th century."
Hopefully someone will take the time and spend the effort to carry this 50+ kg treasure to a location where it can be preserved and displayed for what it represents.

Thus ends our day to Sandwood.   Tomorrow its off on our final leg of the walk to Cape Wrath.

Posted by Unknown at 5:05 PM No comments:

After breaking camp and crossing the A838, we made our way around the grounds of Lochstack Lodge and continued on a nicely maintained estate road which led us around and between pretty blue lochs directly toward the imposing bulk of Arkle.  As the track began to curve toward the west around the northeast of Arkle, we struck off along a very faint trail toward the two kilometer, very narrow Loch a' Garbh-bhaid Mor and its connecting loch a' Garbh-bhaid Beag and the Rhiconich River.  The path(s) along these two lochans were very faint if visible at all, and seemed to be exclusively used by wandering fishermen.  Very slow walking with lots of ups and downs. 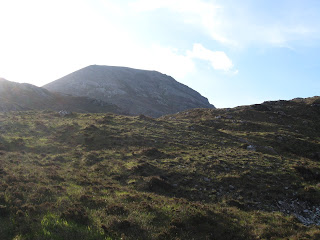 Walking along the two lochs and down the Rhichonich River was slow and tiring.  We finally came out onto the paved road very close to the Rhiconich Hotel, and since it was near noon we decided to attempt a bar meal at the hotel.  The bar was not open yet, but the kind people at the hotel opened it for us, and we had a nice lunch of fish and chips.  It tasted better than any I have had in recent memory.
﻿
﻿

After wandering around Kinlochbervie for awhile, a gentleman working in his yard stopped us asked if we were looking for lodging.  We told him that we were and he asked us to wait while he made a phone call or two.  As a result we were directed to what was undoubtedly the nicest B & B that we had found to date.  The house looked new, and was simply full of what looked like expensive furnishings and art.  The lady of the house was extremely comely and gracious.  Naturally, I fell in love, but had to be on my way.
﻿
﻿We left the next morning in again very fine weather on our way to Sandwood.    Sandwood which I had fallen in love with, like a mail order bride, several years ago when I first saw pictures and read about camping at Sandwood.  Little did I know just how fascinating it would become when I found the "treasure".

After breakfast under the bridge in Kyklesku, we left walking over the high curving bridge into Kylestrome where we immediately got on the wrong road heading west into the Glendhu Forest.  To us Americans, the term forest usually means lots of trees.  In Scotland, forest refers to what used to be there centuries ago.  Now it's heath, hills, heather, bog, and frequently the pine trees of a "Forestry Plantation" not usually much more than fifty years old.

Not too long after we turned right onto the road, we were hailed by some workmen involved in a paving project.  They asked if we knew where we were going, and we responded "to Cape Wrath" to which they responded, "not that way".  They sent us back out to the highway where we found our path about a hundred meters further on.  After less than a kilometer the road ended and the footpath began.